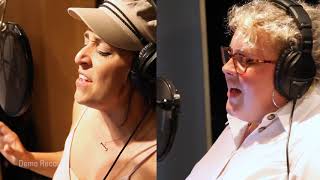 2016 has been very busy! I coached dialects for three films, and saw several I'd worked on released and celebrated. I think I'm most proud of Tika Sumpter's beautiful work as Michelle Obama in Southside with You.

It was a joy to work with her, and very special to see our work together mentioned in her interviews at Sundance. Here's a quote from her Variety Q&A:

"Tika, what was your approach to capturing Michelle's mannerisms and cadence?"

"Sumpter: I wanted to do a slight variation on the way she speaks, to embody rather than imitate. I recognized that there is a distinct way she spoke after watching and hearing her give speeches, so Richard suggested, "Why don’t we get a dialect coach?" That was actually a great decision."

It's so rare that an actor or actress acknowledges their coach. I was also given a special thanks in the credits along with my coaching credit. I'm very grateful.

I've also been busy in the theatre, first directing the world premiere of "Moxie" at Theatrical Outfit in downtown Atlanta, then heading north to coach voice & text for "Disgraced" at the Guthrie Theatre in Minneapolis. Moxie was a hit with audiences and had it's run extended by a week. I was thrilled with the audience response every time I saw it, and grateful we were nominated for Outstanding World Premiere at the Suzi Awards (Atlanta's professional theatre awards). It you'd like to see the trailer to get a sense of the production, click here:

I loved being back in Minneapolis for the summer, and working with the wonderful director Marcela Lorca again. "Disgraced" is a difficult play rhetorically and I was thrilled to make a difference in the speaking of such an important piece. If you'd like to read more about the production, you can click here:

I've ended the season with some directing projects, my five-actor one-act adaptation (with her permission) of Ellen McLaughlin's "Oedipus" for GTA and a staged reading of Lauren Gunderson's "The Book of Will" for Theater Emory. "Oedipus" is part of the Gainesville Theatre Alliance touring Repertory Company and is playing at high schools and theatres around the region. I don't have great photos of it yet, but I love this one of Tiresias in rehearsal:

It was an absolute treat to end this year by working with Lauren Gunderson, currently the most produced living playwright in America. Lauren was my student years ago at Georgia Shakespeare and then at Emory University and I've followed her remarkable career closely. I directed and acted in a staged reading of her play "The Book of Will", about the creation of Shakespeare's First Folio, at the Carlos Museum in conjunction with their exhibition of a First Folio on tour from the Folger Library. I was able to consult with Lauren before and during the reading rehearsals, and then host a talk back with her after the performance. You can tell I adore her by the look on my face here:

I'm grateful for the work I get to do! Thanks for reading. More soon.